There is a very high probability that you have at least heard about Nikon, even if you’re not a photography enthusiast. Unlike many of their competitors, the Japanese manufacturer focuses mainly in optics and imaging products, and as such displays very wide range of products in the digital camera industry. Most of them are professional cameras – and it’s likely that if you have a friend passionate about photography as an art or even working in photojournalism, you will hear mostly positive words about their overall performance and durability.

However, their products are adapted for a wide range of consumer needs; the cheaper compact and bridge camera series are marketed under the Coolpix name, the mirrorless intercheangeable-lens cameras are under the Nikon 1 name, while the more professional digital single-lens reflex (DSLR) cameras come under the Nikon D label. This is just a main summary of their catalogue; the models themselves have quite different features to one another, and they cater to virtually all of your possible needs.

By presenting a couple of their top-rated cameras, this article aims to be a starting point in understanding what Nikon has to offer you – and might help you to discern whether your inner photojournalist is satisfied by it.

One thing that sets apart Nikon models in the digital compact camera markets is the extended long zoom that they are capable of. This L820 model, for example, features a 30x optical zoom that sets it ways ahead in range compared to other cameras in its league. Add to that a 16.0-megapixel CMOS sensor and the image quality and versatility you’ll get when putting it head-to-head with other compact cameras will leave it flashing above the rest.

This is a camera almost specifically made for travels, not only because of its extended zoom, but also for its numerous shooting modes – beach, snow and easy panorama being just a couple of them. The L820 can also record video in various resolutions, including 1080p, at decent frames per second (fps) rates. The AA battery compatibility will certainly be of use in those situations where it runs out of charge and you don’t have any means at your disposal to refill it. Coolpix L820 can be found for about $250.

2013’s P520 model goes even more over the top with its zoom; a lens 42x mechanically stabilized optical zoom will see you have a range advantage even over entry-level DSLRs. The wide angles you can receive from the P520’s 24 to 1000mm lens span is enough to cover about 3-4 different DSLR lenses; the versatility this offers to the user can hardly be overstated.

But despite the decent 18.1 megapixel CMOS sensor, one of the main drawbacks of this model is its use of a low-res electronic viewfinder. It also lacks support for the RAW file format; however, it is a beast of a video recorder, capturing film in 1080p HD at 60 frames per second. Its main selling points are obviously the awesome zoom and wide angles it can capture; they’re probably the best you’re going to get in these respects for the $300 price tag.

Another one of the extensive zoom travel series, the S9500 is probably the slickest and easiest to carry around of the lot, being only 4.4 inches wide, 2.4 inches high and having a 1.3 inch diameter. However, within this slick body it incorporates an 18.1 megapixel CMOS sensor, a x22 optical zoom lens with angle width ranging from 25 to 550mm, and numerous features such as face detection, differing landscape and scene modes or Smart Portrait.

For its size, that’s definitely an over-the-top range and width; this handy little camera can be used for a wide array of different photos. Image quality is on par with the rest of Nikon offerings – meaning great – and some standout features are the inclusion of GPS and Wi-Fi coverage. These are useful to location-mark your photos and also seamlessly transfer them to other devices, such as smartphones or wi-fi printers, without the need of a data cable. True, their functionality is dodgy at best and they proactively drain more from the battery’s life when activated, but they are nice features to be incorporated in a quality $250 camera like the S9500.

We are now entering Nikon’s favorite playground, the DSLRs (and our favorite part of the Nikon digital camera reviews as well). These types of cameras are more recommended if you already have experience with digital cameras and desire more control over the photo taking process, and D3200 is an interesting entry-level choice for this category.

It features a good 24.2 megapixel APC sensor, which represents a monstrous 10 megapixel increase over the previous D3100. Its image quality withstands high ISO settings, and features a default 11-point autofocus. Recording-wise, it has a special movie mode to make those 1080 HP recordings look even better, and features a vast array of retouch functions, ranging from red-eye correction and image overlay to distortion and perspective control. It also has an extensive guide mode that is helpful to those that never dabbled in such black magic.

More staggering than this though is its current low price of over $500. It is true that it will become 3 years old this summer and that newer models are slowly making obsolete, but in combination with a great set of lenses, the D3200 might be the exact dream entry kit into DSLR photography. 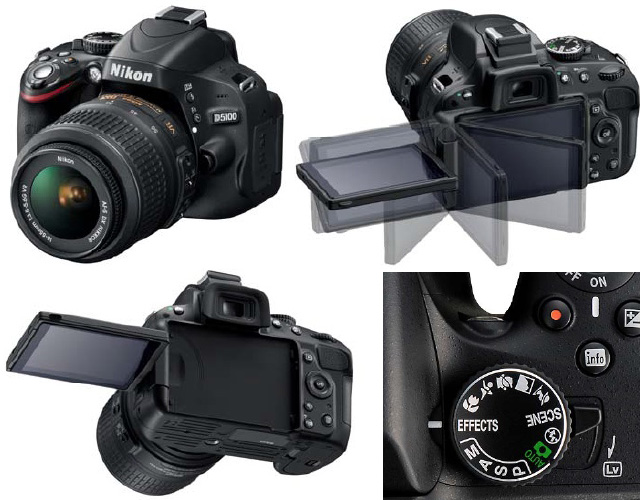 The D5100 is even older, but its value stands from reducing the gap between the D3000 series and the more complicated D7000 series. It is what some would call an “enthusiast level” DSLR. The 16.9 megapixel CMOS sensor may not be on par with other DSLRs, but it does offer crystal clear image quality. The D5100 also sports one of the greatest diversity in picture modes for a camera that’s worth now $400, a good range of both manual and automatic.

It can shoot videos in 1080p HD – another good feature for this price tag – and also sports a very handy retractable and tilting LCD screen. Instead, the D5100 continues Nikon’s tradition of not including a dedicated ISO button which has long been requested by users and adopted by the competition. This doesn’t make the camera undesirable, but it will make you ponder whether the Japanese company’s competition has an advantage in this regard.

Of course, there are way more Nikon models for you to check out, as they put a lot of their effort into DSLRs destined for professionals. This guide though assumes that you’re still either entry-level or don’t have enough experience with digital cameras, as professionals probably know already what they should be searching for.

As a conclusion, Nikon entry and mid-level cameras usually have the furthest zoom you can find in mirrorless, bridge or high-end compact cameras, and are well suited as cameras for travelling and long-range photography. However, they do have their drawbacks when compared head-to-head with their immediate competitors. It will be up to you to decide whether the pros of Nikon digital camera reviews are stronger than the cons that are picked up and resolved by other manufacturers, but generally speaking you wouldn’t be making a bad decision were you to purchase one of their cameras.