If you are looking for an innovative, funky approach to your photographic work, a fisheye lens should be at the top of your camera gear list. Due to the distorted and unique effects it creates, a fisheye lens is not only fun to play with, but it can also bring a whole new perspective to your photography. Whether you are a professional photographer or just a hobbyist experimenting inside different niches, fisheyes make for spectacular results. Being a special effect lens, of course you wouldn’t want to use it on a daily basis. But you can definitely give it a try and spice your portfolio up a bit! 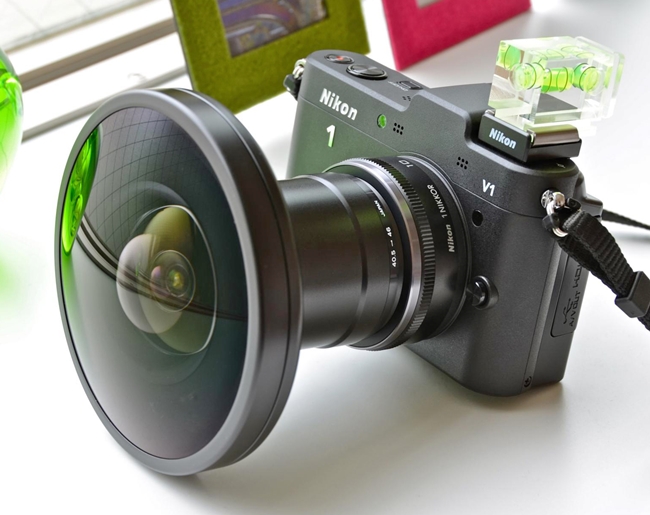 This page intends to provide you with comprehensive guidelines and practical ideas related to the fisheye lens photographic ‘culture’ and applications. Here’s what topics we’ll cover for you:

If you are keen on learning more about fisheye lens developers and technical specs, take a look at our other articles and reviews:

A Short Introduction to the Fisheye Lens Culture & Usage

According to Rudolf Kingslake, the author of A History of the Photographic Lens, the term ‘fish eye lens’ was coined by R.W. Wood in 1911. The name came to refer to a type of lens capable of imaging the subject as a finite circle. What the scientist had in mind is simply how a fish would see the sky by looking at the surface of water and how this effect could be technically reproduced.

Fisheye lenses are also called sky lenses. No wonder that the first use of such lenses belongs to meteorology as scientists could achieve 180 degrees panoramic sky pictures for observation purposes.

Fisheye lenses became widely used in photography during the 1960s, when more and more fisheyes were developed by famous camera gear manufacturers such as Nikon.

In photography a fisheye lens is now commonly used for its distortive effects, but it also has a few specific scientific purposes. Science photographers, for instance, use fisheye lens cameras to study the geometrical structure of plant canopies or to measure solar radiation near the ground.

What is a Fisheye Lens?

A fisheye lens is an extremely wide-angle lens used either to capture a circular panoramic view or achieve a hemispherical effect due to its significant barrel distortion.

Fisheye lenses have multiple applications. Mainly divided into circular and full-frame fish eye lenses, these are now widely used in photography, but also for planetarium projections, flight simulator projections, and astronomic purposes such as recording of meteors or aurora borealis. Fisheye lens uses are very popular in computer graphics and music videos as well. So if you are a gamer, you’re probably quite familiar with fisheye lens virtual-reality images.

As you’ve probably imagined so far, it is a fisheye lens people use for their front door peepholes as it provides a wider field of view.

Technically speaking, a fisheye lens has three basic optical characteristics: a wide angle of view, a typical short focal length, and a variety of mapping functions which add to images different convex appearances.

The fisheye lens angle of view normally ranges from 100 to 180 degrees. However, it can exceed this value.

Focal length is another key aspect of fisheye lenses and it used to vary according to the film format these lenses were manufactured for. Commonly, for the 35 mm film format, which is one of the most popular, fisheye lens focal lengths are between 8 mm and 10 mm for circular pictures, and between 15 and 16 mm for full-frame images.

For digital cameras, however, the focal length can be quite short (1 mm or 2 mm) as these devices use smaller electronic imagers. 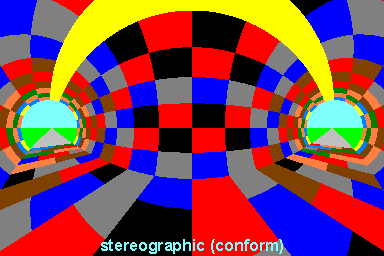 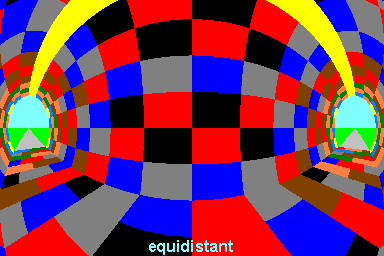 The equidistant projection is fairly popular in fisheye photography.

Peleng 8 mm f/3.5 Fisheye is your option when it comes to this mapping effect. 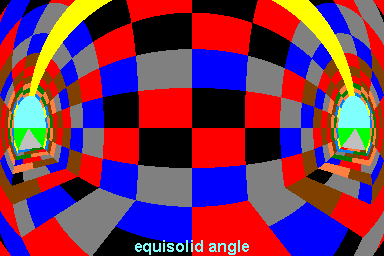 The equalsolid projection is probably the most popular mapping function in general photography as it is ideal for symmetric mirror images. The disadvantage of this effect, however, it resides in compressing marginal details. Moreover, fisheye lenses capable to capture such images are quite pricey. 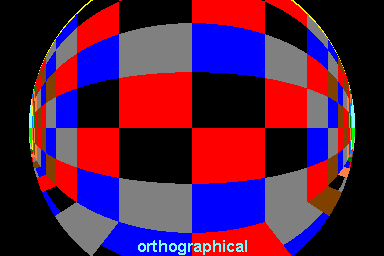 Less common among photographers’ choices, the orthographic projection can be achieved with a Yasuhara – MADOKA 180 Circle Fisheye Lens.

This orthographical mapping function of maximum 180 degrees aperture angle is common for circular fisheye images. Check out the next section for more info about circular fisheyes.

As seen above, a fish eye lens produces curvilinear images as compared to conventional rectilinear pictures achieved by using a wide-angle lens. As we now live in the era of technical advancements, there are special software capable to remap a curvilinear projection into a rectilinear one. The downside of such process, however, is the loss of detail at the margins as the elements imaged at the edges of the frame are compressed. 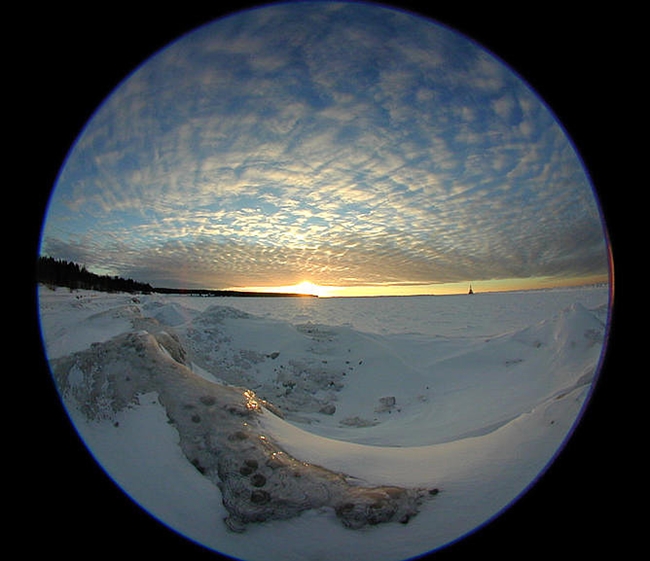 Circular fisheye lenses were the first to be developed. With their 180 degree both vertical and horizontal angle of view, the lenses project images in the form of a circle.

These fisheyes were first developed for scientific applications, but soon came to be popular and widely used in general photographic art.

What distinguishes circular fisheye images is the way the subject is projected as a circle on a black or dark background. 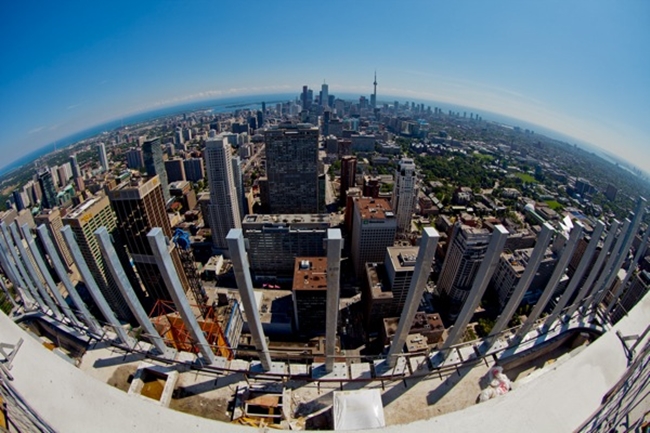 Nowadays, digital cameras with APS-C sensors can achieve the same results as a full-frame sensor camera by using smaller lenses of 10.5 mm or 10 mm. 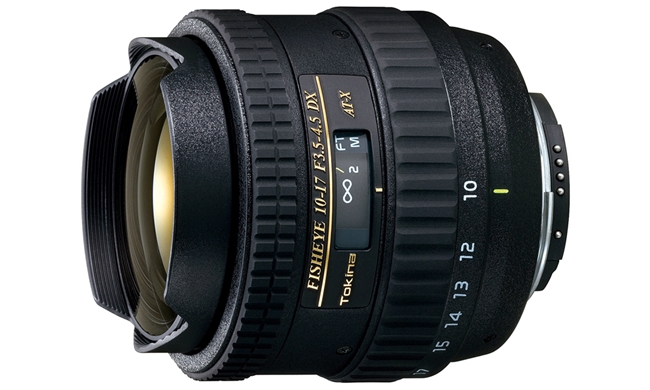 Tokina AT-X 107 zoom fisheye lens was released in 2011 for APS-C sensor cameras, but it also came out with a version suitable for full frame cameras (NH).  What this type of lens gives to the photographers using a digital camera is a 180 degrees field of view allowing for wide sharp images.

The AT-X 107 DX as compared to AT-X 107 NH comes with a build-in hood which also makes it ideal for underwater photo shooting.

These Canon fisheye lens are designed both for full frame cameras (35 mm) and DSLRs, but for EOS DSLR cameras with APS-C sensors can be used only as a cropped full-frame or circular fisheye. 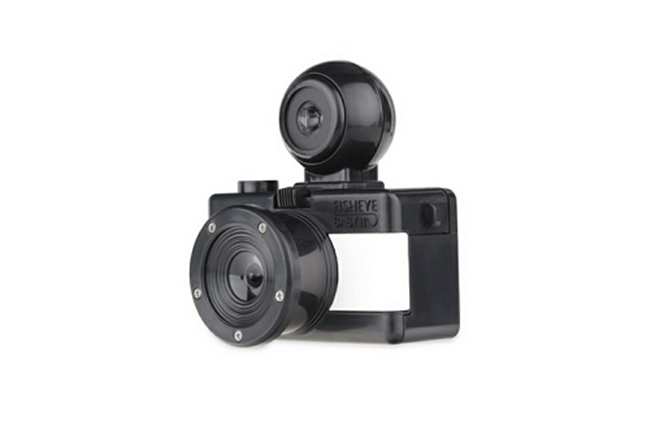 Miniature fisheye lenses were created especially for security and consumer cameras. So they are produced for small format CCD/ CMOS imagers ranging from 1/2″ to 1/4″. Miniature fisheyes can form both circular and full-frame images.

Camera gear developers manufacture similar lines of top quality fisheye lenses. However, each enterprise comes up with diverse tech specifications and possibilities of application for this spectacular, and quite pricey piece of equipment.

This section comprises some of the most popular and well-sold brands when it comes to photo fisheyes.

The Japanese manufacturer is the pioneer of fisheye lens production. They released the first mass-production fisheye, a Nikkor 8mm f/8, in the early 1960s for the 35 mm film format. Since then, the enterprise has developed different types of fisheye lenses from 6mm to 16 mm focal length. 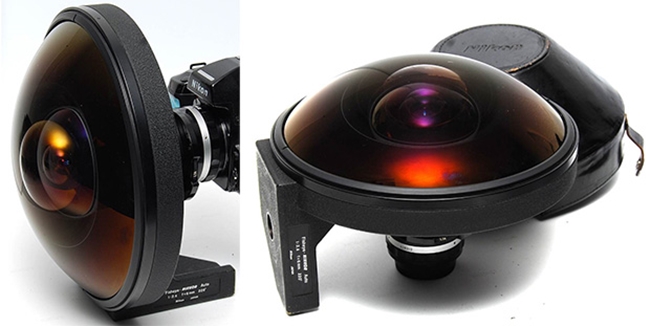 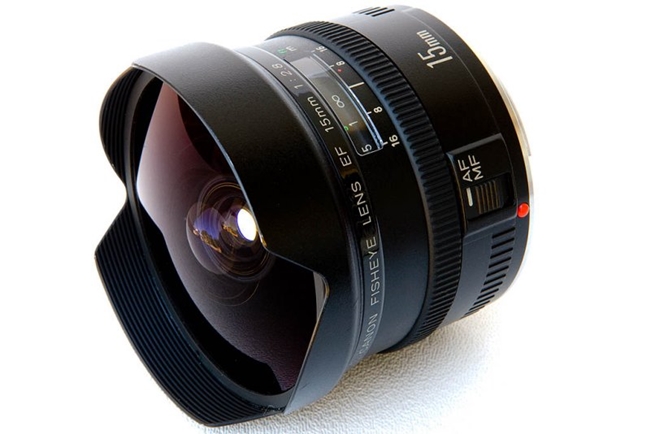 Canon is another major Japanese developer of professional fisheye lenses. Let’s have a look at some of their best products:

A great asset for professional photographers, this versatile fisheye lens is ‘circular’ at 8 mm and ‘full-frame’ at 15 mm. Considered at the top of Canon fisheye lens offer, this lens also has a wide zoom range and solid focus rings, but it’s slightly heavier than others.

Released in 1987, this Canon fisheye still makes for a top-quality lens, but it can only be used on full-frame cameras. Due to its lightweight, as compared with Canon EF 8-15 mm, it is ideal for travelling. 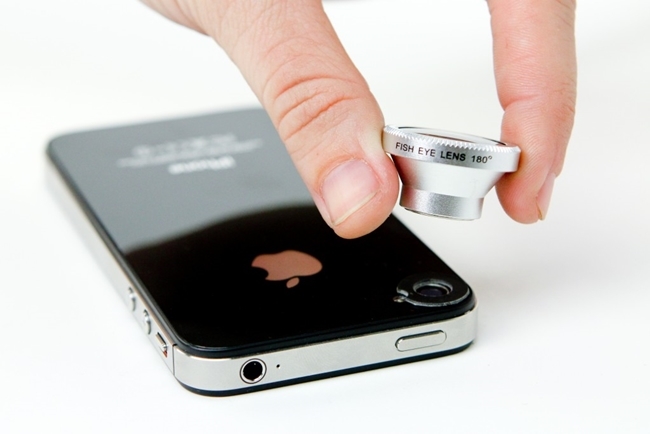 If you are looking for less expensive options, iPhone fisheye lens can capture circular images just like any other fisheye lens. They are easy to use and fun to experiment with. However, do not expect to get the same image quality and level of distortion.  With a magnification up to 180 degrees, a fisheye lens for iPhone is capable to produce hemispherical views and impressive panoramic shots.

As defined by Rudolf Kingslake, a fish-eye lens is a lens of the reversed telephoto type capable of imaging an entire hemisphere as a finite circle on the film due to its great barrel distortion. Let’s have a look at other terms used in relation to fisheye usage and diverse applications.

Field of view (FOV) – also called angular field, it refers to the extent of the world around us visible through the camera at a certain position.

F number – also found under the name of f ratio, it is the numerical value of lens aperture and speed.

Focal length – it determines the size of the image taken of a distant object. Stated in millimeters, it refers to the distance between the lens and the image sensor.