Canon is a major player in the digital camera market, and there is a very high probability that if you ask knowledgeable friends about good price-to-performance cameras you will be pointed towards the Japanese manufacturer. This is mostly because Canon has a good level of variety to its products, covering virtually every photographer’s needs; from the casual and amateurs to those pros that make photography into an art or business.

The first thing to know is that Canon delivers its products into three main lines, all catered towards different needs: the IXUS series showcases compact, easily transportable cameras, the PowerShot series features so-called “bridge cameras”, that try to strike a good balance between performance and price, and the EOS series is the crown’s jewels, digital single-lens reflex (DSLR) cameras, which capture the best images and offer the most extensive options.

Of course, this doesn’t mean that models within these lines aren’t varied themselves. There are sometimes huge differences between two PowerShot or EOS cameras, for example, both in stats and in price. This article will highlight a couple of different Canon models so that you will likely have an idea about what suits you best from the Japanese manufacturer’s offering. 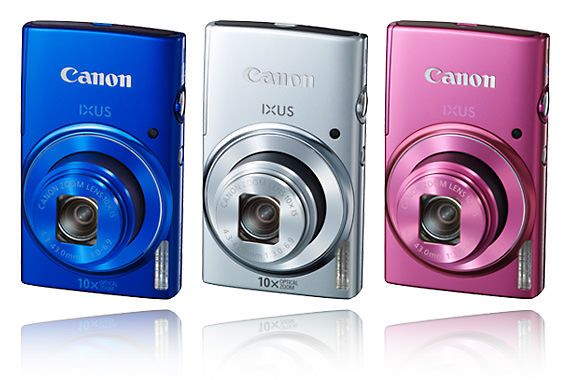 The IXUS 155 is a good starting point, as it is indicative of Canon’s whole range: it offers very decent image quality and fits easily into a pocket or backpack. It’s your classic point and shoot compact camera, but it also has the advantage of looking stylish while at it. It is also fairly simple to use for beginners, incorporating a “Help” button that toggles an on-screen description of what certain functions do.

The IXUS 155 has great specs for a compact camera, boasting a 20 megapixel sensor and a lens with 10x optical zoom. Image stabilization and autofocus technologies are included, and as far as video recording goes, it can record either 30 mins in 720p HD or 1 hour at 480p. A downside for the IXUS155 is the need to carry around an external battery charger, but this is a requirement for the whole IXUS range. You will find it for prices ranging around the $160 mark, which is fairly reasonable for what it offers.

If you want more in terms of specs and options but don’t want to splash out on those expensive DSLRs, the SX520 HS might be what you’re looking for, especially if you want extreme range. It is slightly bigger than a compact camera, but still easily portable, and its main attraction point is the 42x optical zoom that its lens offers.

However, the disadvantage of combining such range with a small 16 megapixel sensor is that it doesn’t manage to attain an image quality better than what compact cameras have to offer. So you’ll probably be interested in it if you’re mainly taking photos that require broader focal ranges.

The SX520 HS can record video in full 1080p HD, and also features a Canon Creative Shot mode which lets you play with different combinations of lighting, composition and color to subtly modify your taken pictures. You can find this one for as low as $199 on Amazon.

Canon’s PowerShot series also incorporates some high-end compact cameras, such as the ELPH 330 HS. The Japanese manufacturer capitalizes on its talent of designing compact cameras that are both svelte and easy to handle, while being just 4 inches high and 2 inches wide. Honestly, this is our favorite fetish entry in our series of Canon digital camera reviews.

The ELPH 330 HS features a 12.2 mp CMOS sensor and a lens capable of 10x optical zoom, offering satisfying image quality. Its main point though is the fact that it has built in Wi-Fi – a feature that’s becoming more and more prominent with compact cameras. It enables you to transmit photos and videos to other Canon Wi-Fi enabled cameras, PC’s, smartphones with a special Canon App or Wi-Fi printers.

However, if you want to post your photos directly on the web, you will need to install a feature called Image Gateway through a computer and register an account with it, and even then you’ll need a network access point which supports a Canon Image Gateway portal. If you think the trouble is worth it, you’ll find the ELPH 330 HS for about $200.

This one might generate confusion, as for some reason it is marketed under the special “Rebel T3i” name in North America and under the EOS 600D in the rest of the world. But don’t be fooled by this, it is actually part of the EOS series – basically, Canon’s DSLR line.

DSLRs themselves come in different types, mainly classified by the number of different options they make available and their ease of use. The Rebel T3i is trying to be somewhat of middle-point, while still being considered “entry-level” for Canon’s interchangeable lens line. It features an 18 mp CMOS sensor which has an integrated cleaning system – DSLR camera sensors are susceptible to dust as they are exposed by the interchangeable lenses, so this might come in handy.

The Rebel T3i has a very handy articulating LCD screen, which can be rotated as needed depending on circumstances. It also has a vast array of filters and scene modes you can use to customize the way you take photos or record videos. Speaking of recording, the Rebel T3i can record in 1080p at 25 frames per second (fps), or at lower resolutions in 50 fps.

Initially launched in 2011, the EOS 600D/Rebel T3i can be bought from Amazon at below $500. This is quite a low price tag even for entry level DSLRs, so you might want to grab this opportunity in case compact cameras aren’t to your liking.

The EOS M was a first for the Japanese manufacturer, marking its entry into the mirrorless interchangeable-lens camera (MILC) market. You might find this term in reviews under abbreviations such as CSC – compact system camera – or DSLM – digital single-lens mirrorless.

Mirrorless cameras are basically an attempt to offer many of the advantages of the DSLR into the body of a compact camera, while also keeping the benefit of interchangeable lenses. To this end, they do not have usual mirror reflex optical viewfinders, but instead employ alternates such as LCD screens or electronic viewfinders.

The EOS M garnered fairly positive review when it launched in late 2012, being praised especially for providing DSLR-like image quality. It sports an 18 mp sensor and a variety of shooting modes and image processing options, making a clear statement that it’s out of the compact camera league despite its size.

Similarly to the Rebel T3i, this model can shoot video in 1080p HD at 25 fps or at lower quality at 50 fps, and it also has a 3-inch touchscreen LCD interface. Considering it’s already more than two years old, its price has gone down quite a lot; whereas at launch it cost about $1,200, you can now find it now about three times cheaper, with Newegg listing it at $400. It’s up to you if the absence of a mirror viewfinder can be justified by the small dimensions and overall portability, but if it is, you might want to consider the EOS M.

We hope you enjoyed our series of Canon digital camera reviews and that we helped you get closer to choosing the ideal model for your photography needs.