Today’s faceoff, Canon 7D Mark II vs 70D, is one between two of Canon’s products that are aimed at semi-professional photographers. Everything, from their specifications to their price, to their competitors reflect this target audience.

We hope we can shed some light on the matter because their performance can be construed to be quite similar (particularly to those who are not altogether versed in the secrets of digital photography), yet the difference in price is considerable, to say the least, as the EOS 7D Mark II is a meaningful 50 % more expensive than the EOS 70D.

This post will consider the general specifications of each product, then we’ll try to make a case for each of them by surveying their strengths and weaknesses and we’ll arrive at a verdict while also surveying them in relation to the competition. 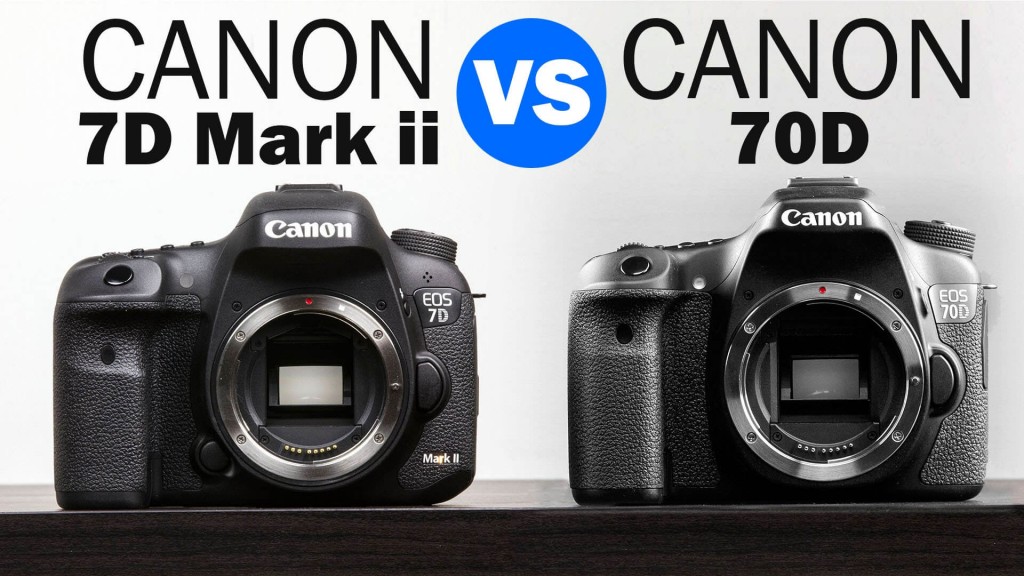 First of all, we’ll try to articulate a context. The 70D is the older of the two models, having been announced in July 2013 and then it hit the stores the following fall. The 7D Mark II is an upgrade of Canon’s highly successful 7D model (which coincidentally had an amazingly extended span of life of more than 5 years), having been announced on September 15th, 2014. While they definitely are different animals when considering their release dates and prices, a sound comparison is adequate in light of their performance.

Both products are APS-C DSLR cameras capable of producing images with a maximum effective resolution of 20.2 megapixels. The sensor size for the Mark II is 22.4 mm X 15 mm, and the 70D’s sensor is 22.5 mm X 15 mm, therefore on this front there is really nothing that differentiates one from the other.

The actual differentiations (mirrored by the price disparity) are beginning to take shape when analyzing the video capabilities. The Mark II is able to shoot at the 1080p quality at 24, 25, 30, 50 and 60 frames per second while the 70D can only do 1080p a maximum of 30 fps. Mark II can also shoot video in MP4 format as opposed to the 70D, which only does MOV. To round up the sections where the Mark II has an obvious superiority, we should mention the revolutionary autofocus system, which 65 cross type points vs the 19 of the 70D, and a bigger JPEG and RAW buffer.

That being taken out of the equation, there should also be mentions of the advantages of the 70D over the Mark II, which (although they tend to touch the practical side of things) shouldn’t be neglected: a slightly better color depth (22.5 bits over 22.4 bits), a big difference in shutter lag (75 MS compared to 249 MS), the interactivity provided by its flip-out touch screen, faster autofocus when video is concerned and an increased battery life that can support up to 920 shots (vs 670 shots).

Canon 7D Mark II vs 70D –Comparison In the Field

How do these differences in general specifications pan out in the field of battle? Does the small advantage the Mark II has over the 70D translate into practice?  A reviewer has analyzed the performances for portrait photography, street photography, sports photography, daily photography and landscape shooting. We believe that this is one of the most relevant techniques of comparison because, at the end of the day, concrete results are the reason everyone gets paid for, and specs aren’t the be all and end all in this contest between the Canon 7D Mark II vs 70D.

What about the Competition?

As you have probably concluded by now, the Canon 7D Mark II and the Canon 70D are quite similar in the general specifications and performance areas, with the only significant differences coming in the video department (in favor of the Mark II), yet the leap in price from the 70D is more than significant. Furthermore, when talking about today’s market, they are beginning to show their age. If you already own one of these models, here is a crude comparison.

They hold their own compared to recent DSLR’s (semi-professional that is) because they are great at shooting video, a consequence of their seniority is that there are many more lenses available for them, they perform decently in the connectivity realm, yet the antiquated technology is prominent when considering image quality and stabilization, maximum resolution and dynamic range.

Against professional DSLR’s their advantages again tend to be in the video department and, obviously the pricing, while they wouldn’t even enter the equation if light sensitivity or detail were the main concern. Nevertheless, it would still be a comparison of the “apples and oranges” kind.

Canon 7D Mark II vs 70D is The Verdict

The trial concerning the Canon 7D Mark II vs 70D is going to be decided solely on the evidence. Performance-wise, there really is nothing of notice to separate them. Design-wise, the same applies. Video-wise, the Mark II has the considerable edge. Money-wise, one is $1,500 and the other is $1,000. With one blow for each side and all else being equal, the decisive argument is the price. If an all-purpose, semi-professional photographer is to choose between the 7D Mark II and the 70D, then we would recommend the 70D.